Want to try something new, maybe experiment a little (otherwise known as designing)? Why not try it on a little person sweater first. They’re quick and little people are generally not too fussy as long as you choose the right colour.

Karen asked me about adding a stitch pattern to the raglan lines since she wanted to try it herself. I dug around in my UFO pile of experiments and found something I had started. I don’t even know when. Not finished, imagine that!

And now it is. It’s in two colours because I didn’t have any more of the original colour dye lot (shh, don’t tell).

With all this extra patterning, the body knit up in a flash. I’ve added it to the Cabin Fever ravelry store.

Yes, it’s happened to me too. The first time it’s hard to envision the entire process. A little time thinking ahead would have saved me some grief.

That’s what I decided to do this time. I wanted to widen the raglan lines so that when I reached the bottom of the yoke and put my sleeve stitches on spare yarn, I would have the raglan patterned stitches on the Fronts and Back.

The dark lines are where the original Raglan Markers are. Then place a second marker at each raglan line towards the Front and Back, in this case moved over by 5 stitches.

When I place my sleeve stitches on spare yarn at the bottom of the yoke my raglan patterned stitches will remain with the Body. 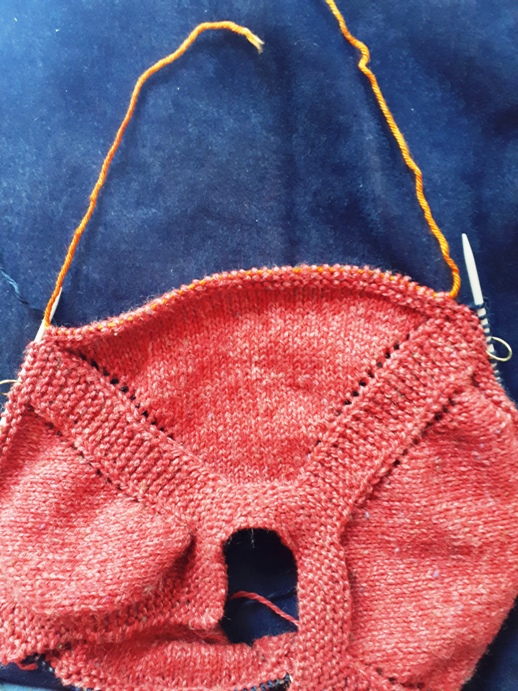 Now I can continue down the Body with a nice little pattern down the sides. This is a child-sized sweater so there are no underarm cast on stitches to consider.

If this was an adult size there would be underarm stitches separating the two sets of  garter stitch patterns. More thinking might be required. I’ll leave that to you. Now I need to get going to finish the Body.

Any Gauge Patterns by Deb Gemmell

K. asked if it was possible to add a pattern in the raglan lines just as I did with the underarm stitches in What to Do with All That Stockinette. She had knit a sweater with patterned raglan lines but didn’t feel she could do it on her own.

Of course you could. Start with something simple and not too wide. I dug around my UFO projects and found one I had started.

Here’s how. Cast On at the top according to the pattern. Stop at the Marker Round (in the round where you are going to place the raglan markers). Do Not knit this round yet. Count across the stitches on your needle and with removable markers, place the markers as the pattern specifies. In the original pattern the marker for the raglan line would have been set up to be worked like this:

Now get 4 more markers and move the markers so there will be more stitches at the raglan lines. I like to keep these knit stitches, YO, K1, marker, … extra sts…, marker, K1, YO in place since it makes reading the pattern easier to follow.

Decide how wide you want the new raglan lines to be. My Raglan Markers are 5 sts apart.

You can put any number of stitches here depending on how many stitches you have in the Front, sleeve, Back sleeve and Front.

This is a really simple example and I’m sure you can improve on it.

Here is an excellent example of another simple idea where just making the raglan lines wider and staying with stockinette stitch still makes the Sunshine Coast pullover by Heidi Kirrmaier look fantastic.

Are you going to give this a try?

I did a talk at a knitting guild last month based on the Any Gauge Raglan. I took them through the entire process from diving into their stash and casting on to figuring out how to get the Bottom of the Yoke to fit their unique body.

In the knitting industry we use the actual measurement of your bust (using a tape measure) + Ease to determine the final size of your sweater. One measurement. I know, it seems crazy. Obviously this one measurement cannot tell the whole story of your figure.

So I had everyone measure their Bust and their Arms. Almost no one had ever measured their arms. It’s important for your sleeves to fit as well as your body. I find that I need a slightly bigger sleeve than most patterns are allowing me for my bust size. I know from talking to many plus sized women that if they are busty the sleeves are often too big for them. Maybe you have found you can’t get both the bust and the sleeves to fit perfectly.

I have a solution. In the Any Gauge Raglan the raglan increases in the Yoke are worked until you reach the exact number of stitches needed to go around the Actual measurement of your Bust and both your Arms. At the Bottom of the Yoke it has to fit YOU because they are your measurements.

At this point the sweater would fit you like a second skin. If that’s the size of sweater you want you have it right there.

For a more relaxed fit some Ease (the amount your sweater is bigger than your actual body and arms) is added as you work the Divide Round as Underarm Cast On stitches. Again you get to decide how much ease you would like. Do you want a close fit or looser fit?

The Any Gauge Raglan Yoke is worked to your personal measurements. Then you get to add the amount of Ease you wish for the fit you want.

Any Gauge Patterns by Deb Gemmell

Maybe you wake up one morning and decide today is the day you’re going to cast on for a pullover for yourself. It’s time. You go to your stash and pick out some yarn that has been calling to you. You check through your library of patterns at home or on ravelry to see if you have one that matches the pullover you want to make. Time passes, more time passes and you haven’t cast on yet.

What if you could get right to it. Cast on now. That’s what this Any Gauge Raglan pattern is all about. 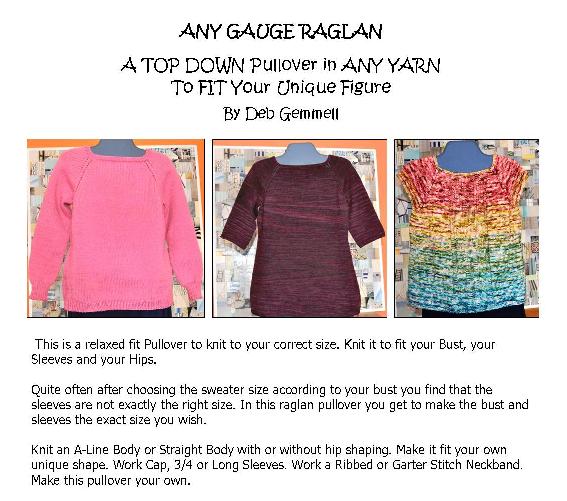 I am a problem solving designer. One of my problems and maybe yours too, is that I don’t get gauge with the recommended needle size. I’m a loose knitter so usually go down one needle size to get close to gauge. With this pattern I am going to get to use the unique gauge I get with this particular yarn. One problem solved.

You can Cast On using the gauge information on the ball band if you usually get close to gauge with this yarn (I get close enough with the needle change) or you could do a swatch. Figure out the number of stitches you get in 1″ and you’re ready to Cast On for the neck opening.

Yes, there is some math, more properly called Arithmetic. Nothing more than taking measurements in inches and multiplying by your Gauge (number of stitches in 1″). You can do this.

I’m really excited to present the Any Gauge Raglan Adult. 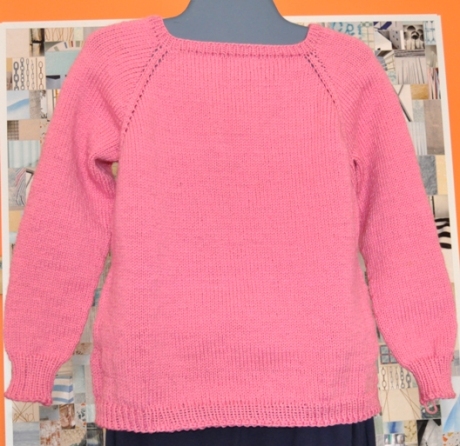 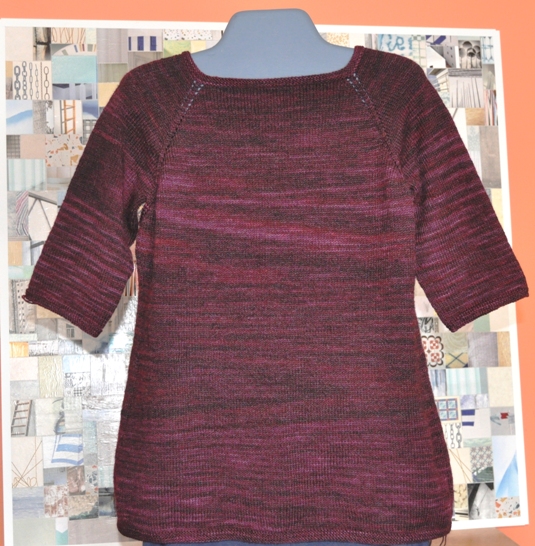 When you knit a Top Down sweater, you choose the size using your bust measurement. Do the sleeves always fit? They quite often don’t for me.

I think I have solved this problem in the Any Gauge Raglan sweater series. I’m very excited to present the first one. This is a recipe style pattern where you do some math and work according to your own gauge. Tight knitter, loose knitter, it doesn’t matter. Your particular gauge matters.

What prompted this idea? As a designer, I would usually choose a set of sizes for the Body and Sleeves for each pattern. I would look at the set of sizes and work out the number of stitches needed for the Front, Back and Sleeves at the Bottom of the Yoke. Then I would work backwards up to the neckline to decide on the number of stitches for the neckline for all the sizes. The finished sleeve size dictates how wide the top of the shoulder is at the neckline.

But what if I want a particular shape of neckline? In this case I wanted a rectangular neck opening with a wide shoulder.

The size of the shoulders on these neck openings is wide so that there is a drop down the front and back of the neck. After working all the yoke increases the sleeve may not be the proper size for the sleeve you need.  Oh, no, what to do?

I made a video to explain:  Place Sleeves on Any Gauge Raglans

Use ANY YARN you want. Go ahead, dive into your stash and pick the perfect colour in any weight of yarn you have. Cast On and knit any size up to 4 years old.

What do you think of this idea? All comments, questions and photos are welcome. I can’t wait to hear your thoughts.

On your next raglan which you don’t want to be a raglan, you could try this: 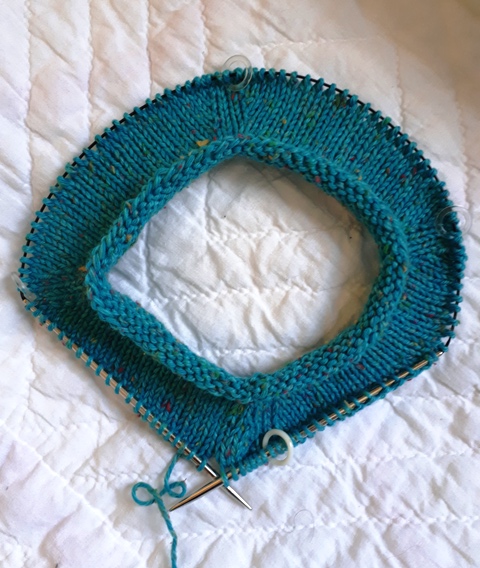 I’ve written a new pattern based on this idea called Kid’s Diamond Pullover where I moved the markers from the standard raglan set up to new positions. I still worked the same number of increases every other round. Moving the markers changes the shape of the neckline and this set up will give you a slight V in the front and back of the neckline with no trouble at all. 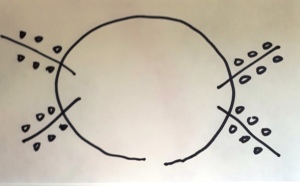 So what would happen if we just placed the 4 markers equidistant from each other in a pullover? There are still the same 4 markers where you will work a pair of increases every other round. The stitch numbers will work out the same. It’s actually not too much of a leap is it?