I’m always excited to learn of a new tip. I first heard about this at a knitting guild meeting but sometimes it takes me running into something a couple of times to finally give it a try. I tried this one and it totally works. 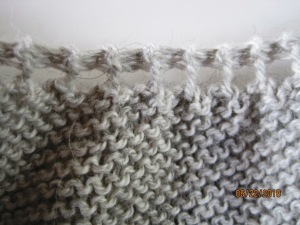 Since I was going on holiday and had given myself permission to knit something just for the fun of it, I have been paying close attention to what people were excited to be knitting. A young man recently told me he was knitting a triangle shawl by Sylvia McFadden. When he said it was really well written my ears perked up. Since I have knit several triangle shawls I thought I would knit the crescent shawl Waiting For Rain. I’m very late to this party but it looked interesting and has a new Short Row Lace technique. That’s exciting.

I agree that is really well written and I enjoyed knitting it until I realized that the top edge was so tight that I didn’t think I was going to be able to block it out into any kind of a straight-ish line. I think this is a common problem with the garter edge that borders most shawls. They constrain the final size because those stitches can’t stretch any further. I put it down. Well, actually, I took a photo and then I put it in the corner. 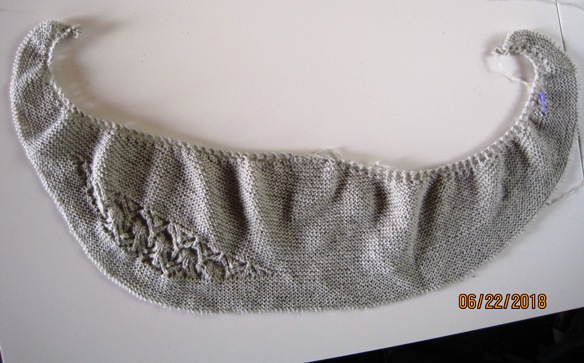 Not really wanting to let it go, I went back to the ravelry projects to have another look at all the shawls that had been made only to discover that there was a Hacking page with extra tips included with the download of the pattern. HOORAH, there was the exact tip I needed.

TIP:  Sylvia suggests that if you find the top edge too tight, on the Right Side rows work a YO (yarn over) after the first 2 stitches (the garter stitch edge) and before the last 2 sts (the edge). On the Wrong Side Rows, drop the YO off your needle. That will make the 2 edge stitches bigger. IT WORKS! Really, really works.

The bottom shawl is my second attempt and not as far along as the first but I think you can see that it’s not as bunched up along the edge. I am sooo happy with how much looser the top edge is. I’m knitting again with a goofy smile on my face.

P.S. I did make a small modification. I found that the YO worked after the 2 stitch edge interfered with me being able to keep track of the shawl increases so I put the extra YO right in between the 2 edge stitches. It’s working, it’s working!! I will be using this on all shawls from now on.

ANY GAUGE and GAUGE-FREE patterns by Deb

I'm a Knitter. The capital K means every day, everywhere. I'm co-owner of Cabin Fever with my sister Lyn. We have published over 100 patterns and 11 books. I'm also working on a new set of patterns for Any Gauge knitting. Dive into your stash and cast on for a Top Down sweater that fits, or an accessory to use up those odd balls of yarn. View all posts by debgemmellmods